Editing and running your own visual novel

NVList comes packaged with an example project which shows off some basic functionality. press the ‘Run Game’ button in the build tool to run the example project. The first time you run the project it can take a long time to start (some extra files will be downloaded), but subsequent runs should be much faster. After a while, a new test window will pop up showing the example script.

Now let’s try editing the script. If you still have the test window open from the previous step, close it now. Press the Open project folder button in the build tool to open a file browser window showing the project files. We’re going to edit a script file, which is located in res -> script -> main.lvn. Open the file in your favorite text editor (Notepad++ works).

Find the line that says # Insert your code here and add the following immediately below it:

Save the changes in your text editor and go back to the build tool. Press the Run Game button to test your changes. Once the test window pops up, you should see something like this: 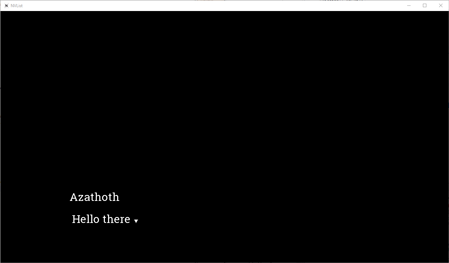 Now we know how to show text, but it’s not much of a visual novel without visuals. Let’s add a background image, and then a character image (sprite) on top of it. Open your text editor again and change your code to the following:

Running the game again shows the added images. If you’ve left the game running, press Ctrl+F5 to reload the changed files and restart. 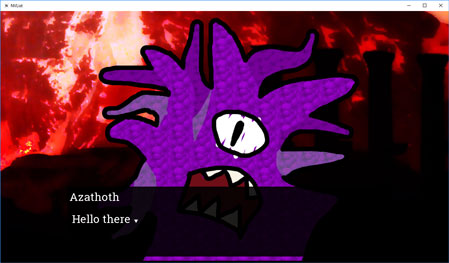 The following section is an abridged version of the chapter “Distribution”

When you want to share your creation with others, you can use the build tool to create a packaged release. The package contains your visual novel, together with all the files needed to run it (you don’t need to install NVList to run it).

To create a packaged release with the build tool, press the arrow button next to Run Game, then select Create release from the drop-down menu. Building the release will take several minutes. Once it finishes, a file browser window showing the created files will automatically pop up.